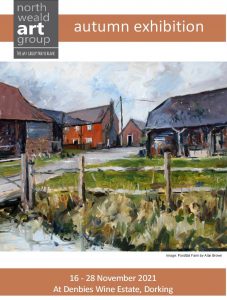 CHRISTINE HOPKINS SGFA
Vice-President of the North Weald Art Group and an elected member of the Society of Graphic Fine Art.
Old newspapers, volume XII of the Chambers Encyclopaedia (1955 edition), gift wrapping,  tissue paper and junk mail are all components of the dynamic mixed media paintings by Christine Hopkins. The contents of the recycling bin, and other discarded papers, form the collage base for colourful interpretations of the landscape. Christine is drawn to strong linear forms, and in particular the built world.
“I love small-scale domestic architecture, the sort of houses that ordinary people live in. I sketch wherever I go. This enables me to get a real understanding of the location I’m in. But I often distill this in the finished piece, to give more of the flavour of a place rather than an accurate depiction. Sometimes I will combine sketches from several different places, filter them through my imagination, and produce a new version of reality, based entirely on wishful thinking; a rather ideal world that has some resonance for everyone. The comment I hear most is ‘I know where that is – Hastings/St Ives/Portugal/almost anywhere’ but the paintings are much more about the feel and memory of many places, rather than one. And I love hiding things in the collage – appropriate newspaper cuttings, fragments from clothing catalogues, sheet music etc. For a recycling project I used old train and bus tickets, and commissions can be personalised in this way.”
Christine served on the SGFA Council from 2009 to 2015.